This month’s spotlight focuses not on an individual artist, but on the impact of art itself on where one lives. Your home isn’t just a space you occupy, but an ever-evolving reflection of yourself and your loved ones. Collections of artwork and décor can show how a home comes to life through its owners. In the home of our clients Stephen and his partner, Michael, they display design harmony through what would normally be opposing tastes in artwork. This balance of art pairs with the tribute they pay to the history of their home.

Stephen and Michael moved into their home in Chicago in 2015 after falling in love with Hyde Park. After their offer on the property was accepted, they found that the previous owner was an interior decorator who left behind several pieces of art that were serendipitously created by one of Stephen’s favorite artists, Anna Baker. It wasn’t until they had an appraiser review the signatures of the artwork that they realized their luck. “We didn’t have a network when we came to Chicago. I didn’t know who to take our art to. We heard about Seaberg through an appraiser.” 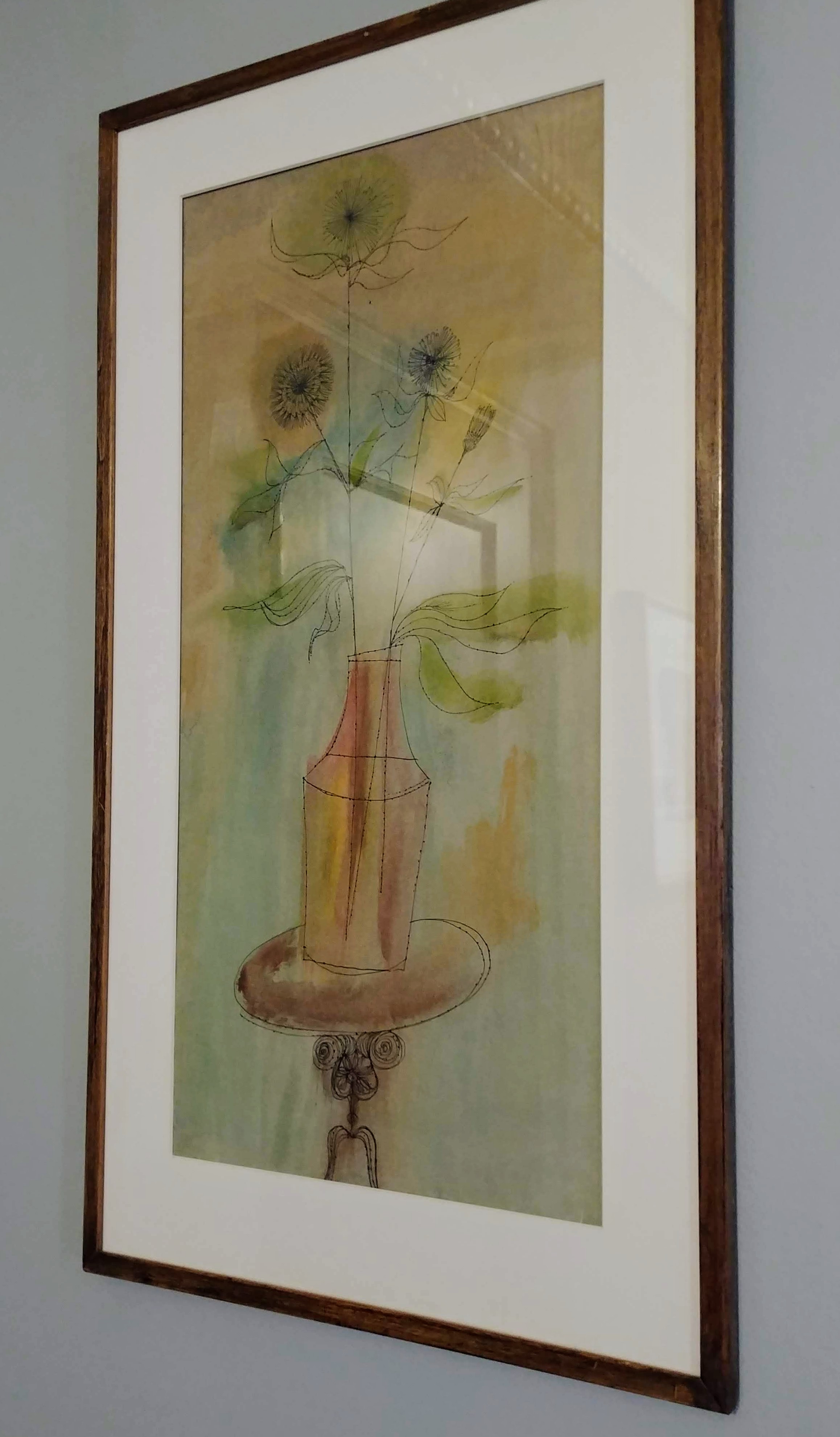 The first three works brought to Seaberg included a watercolor by Anna Baker, a Chagall etching, and a piece by Georges Braque from his Lettera Amorosa series. These, along with a charming piece featuring a Pug live in their foyer. “I don’t know how or why it happened, but they fit into our entrance. It’s sort of an introduction to what the space used to be and what we turned it into.”

Stephen is drawn to works where fine art and graphic art intersect, such as old advertisements; Michael is very eclectic, having gone through phases of enjoying cubist and abstract works. Michael responds strongly to color and Stephen relates to texture and process-driven work. Both respond to the aesthetic narrative of “a stranger in a strange land” and Stephen notes that he is drawn to a theme of objects moving through time and changing in context. When they began collecting together, they looked for qualities in the artwork that they both enjoyed. 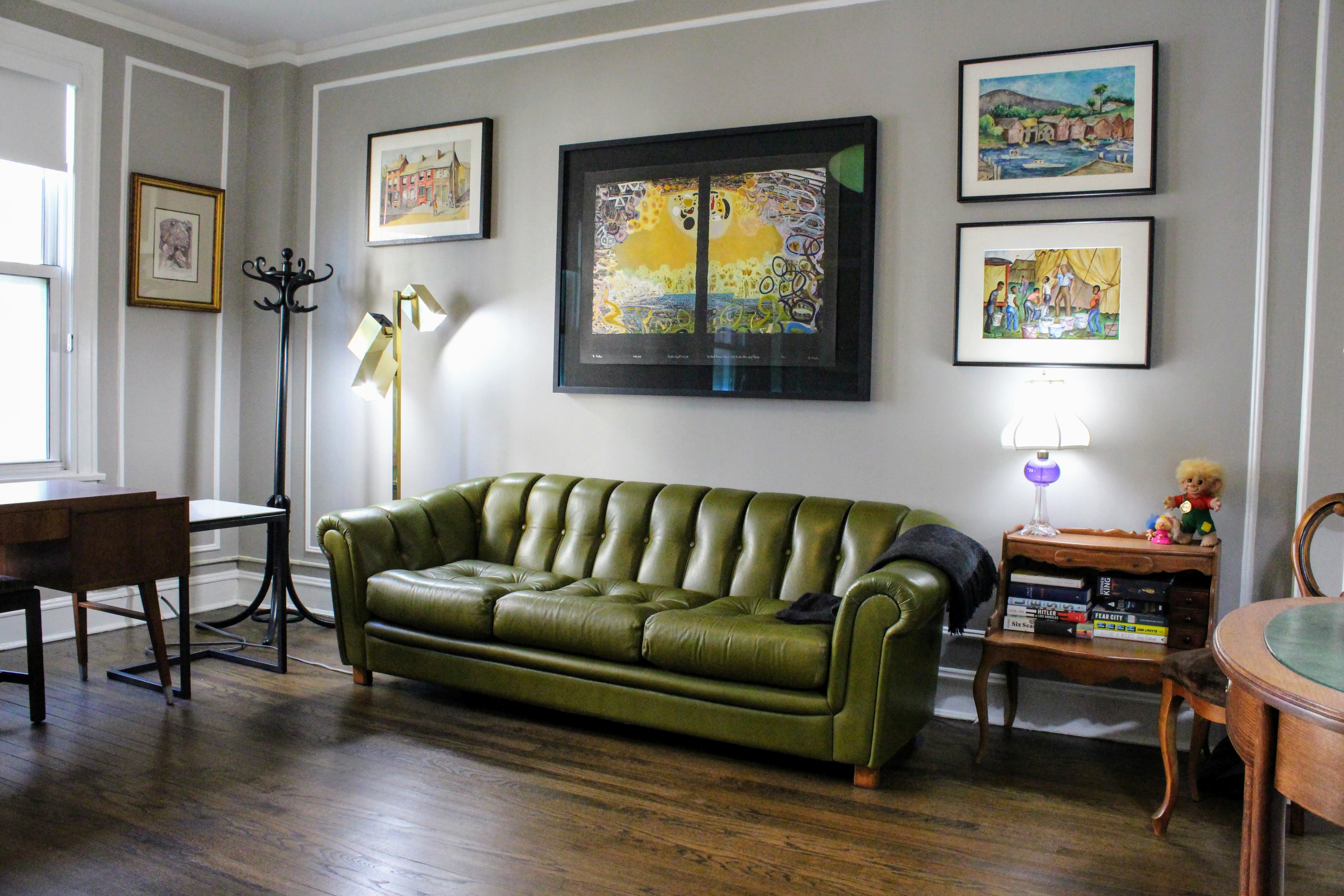 “You’ll see that each room in our house has a different tone and color. Our living room is more muted with blues and greens. When you move into the dining room it has similar lines and geometry, but the colors are much more vibrant. Michael’s office is green because it’s his favorite color. It’s his sanctuary.” Each room has its own character which the artwork lends intention to. They chose to hang the Jack Sonenberg at eye level leading from the entrance to create a strong pull into the living space. Parallel on that wall is an Annette Shevelson Troxel. The rest of the artwork in the room has similar, calming lines and color schemes. The dining room is more of a social space, so the more colorful, eclectic artwork is present. It’s their tonal variety of artwork that makes it a fun challenge for Seaberg. 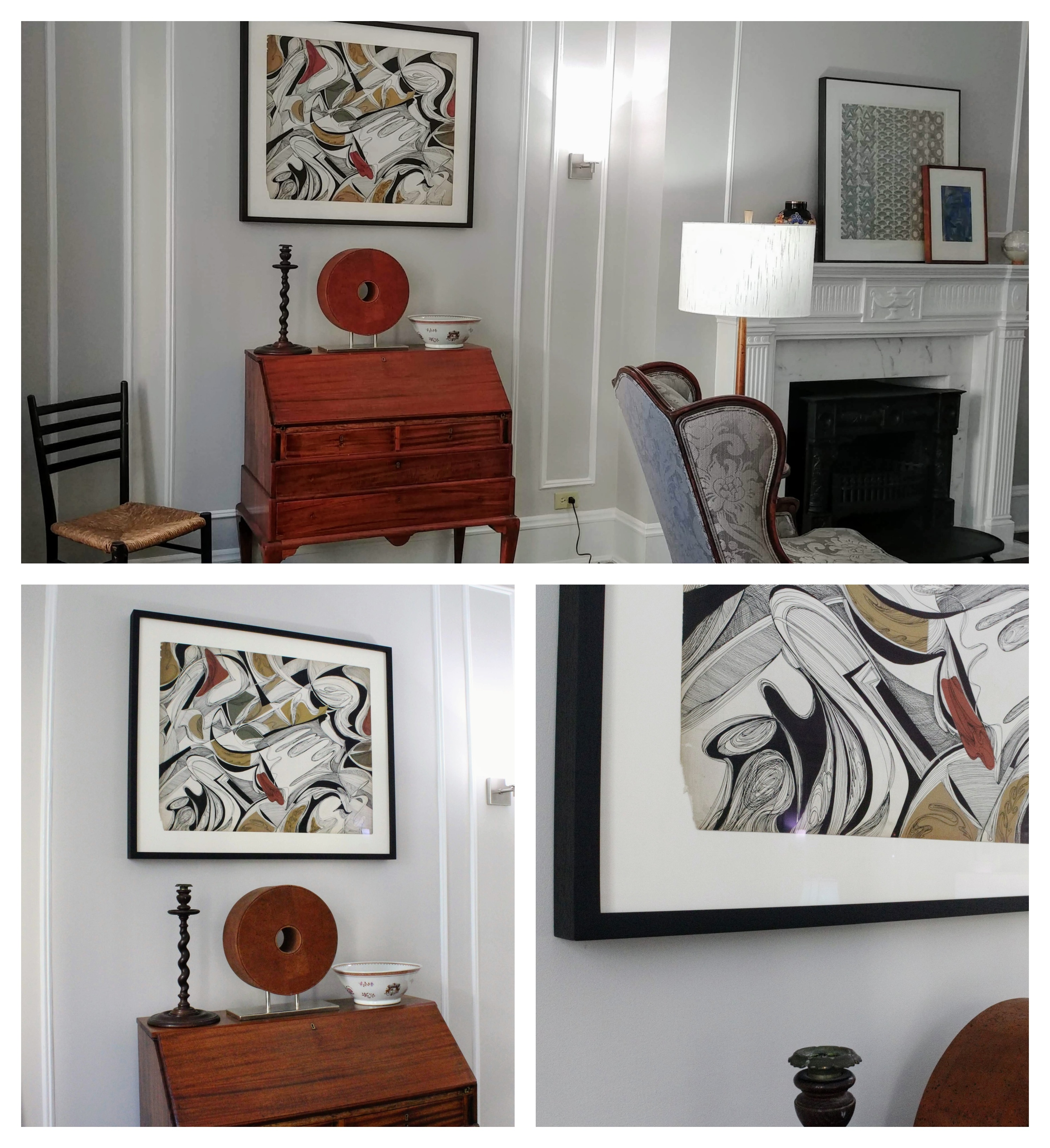 “I’ve only become more comfortable with Seaberg over time. When someone recommends a framer to you it’s like a blind date. You’re not sure if their taste is the same as yours or if they’re able to give good suggestions.” As the pair’s art collection has grown, so has their relationship with us. Because of the interesting works they bring in, we have the chance to play with the style of the mats and moulding. “Beth and Laura always have so many ideas. They know us, they know what we like. Yet there’s so much they think about that we don’t. We’ve learned to trust them.” 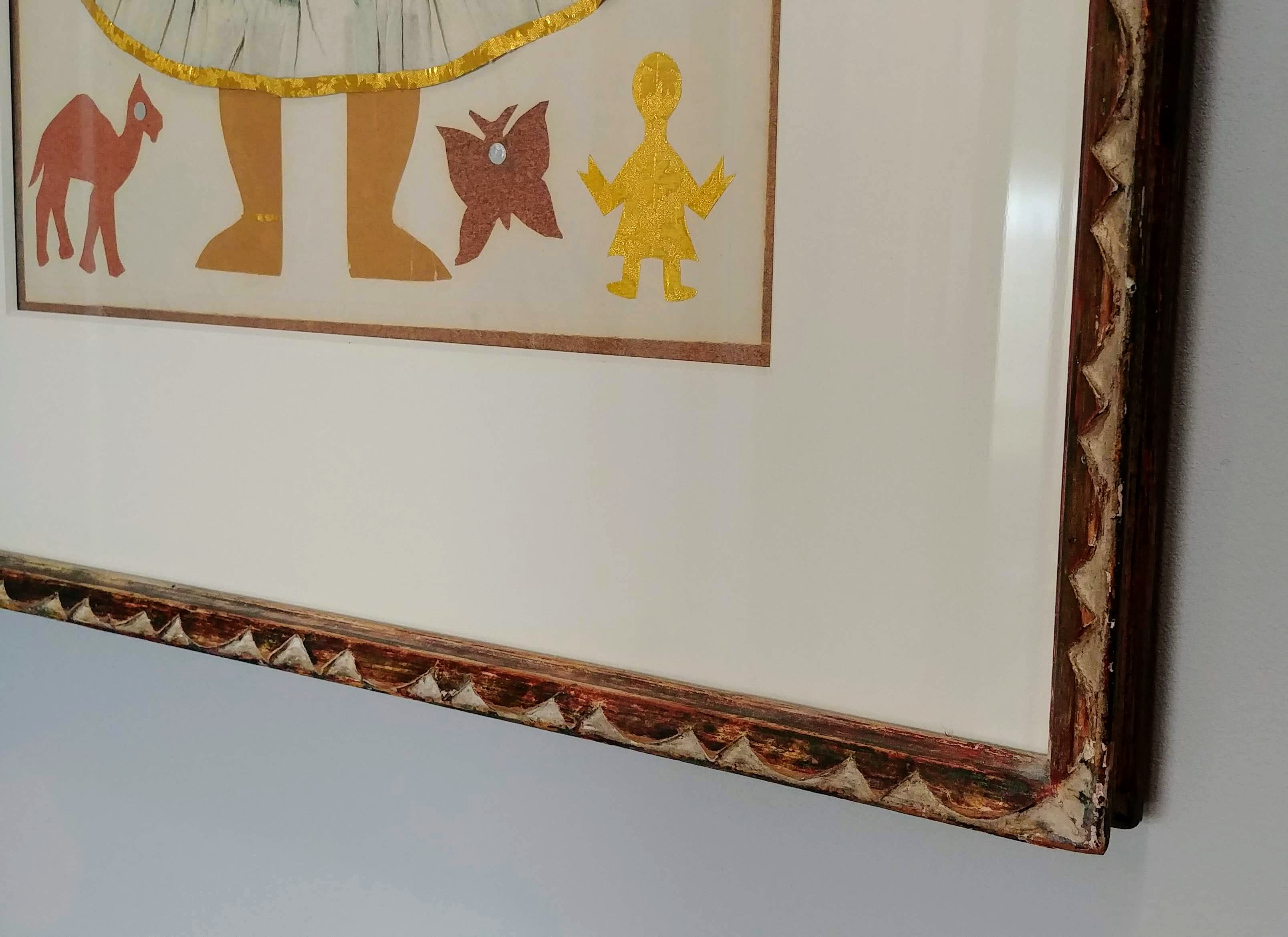 “We’ve never asked Seaberg to do anything that they weren’t capable of doing. We’re always excited to have the artwork come back to us, showcased in a way that makes it stronger.” The trust that Stephen and his partner hold in our custom framing experts comes through when we make less than expected suggestions. “We brought in an abstract diptych landscape. I generally do not like a black mat on anything. Laura suggested a black mat and I thought she was crazy, but it just worked perfectly. It was against every instinct that I had, but it was the best thing for the piece.” 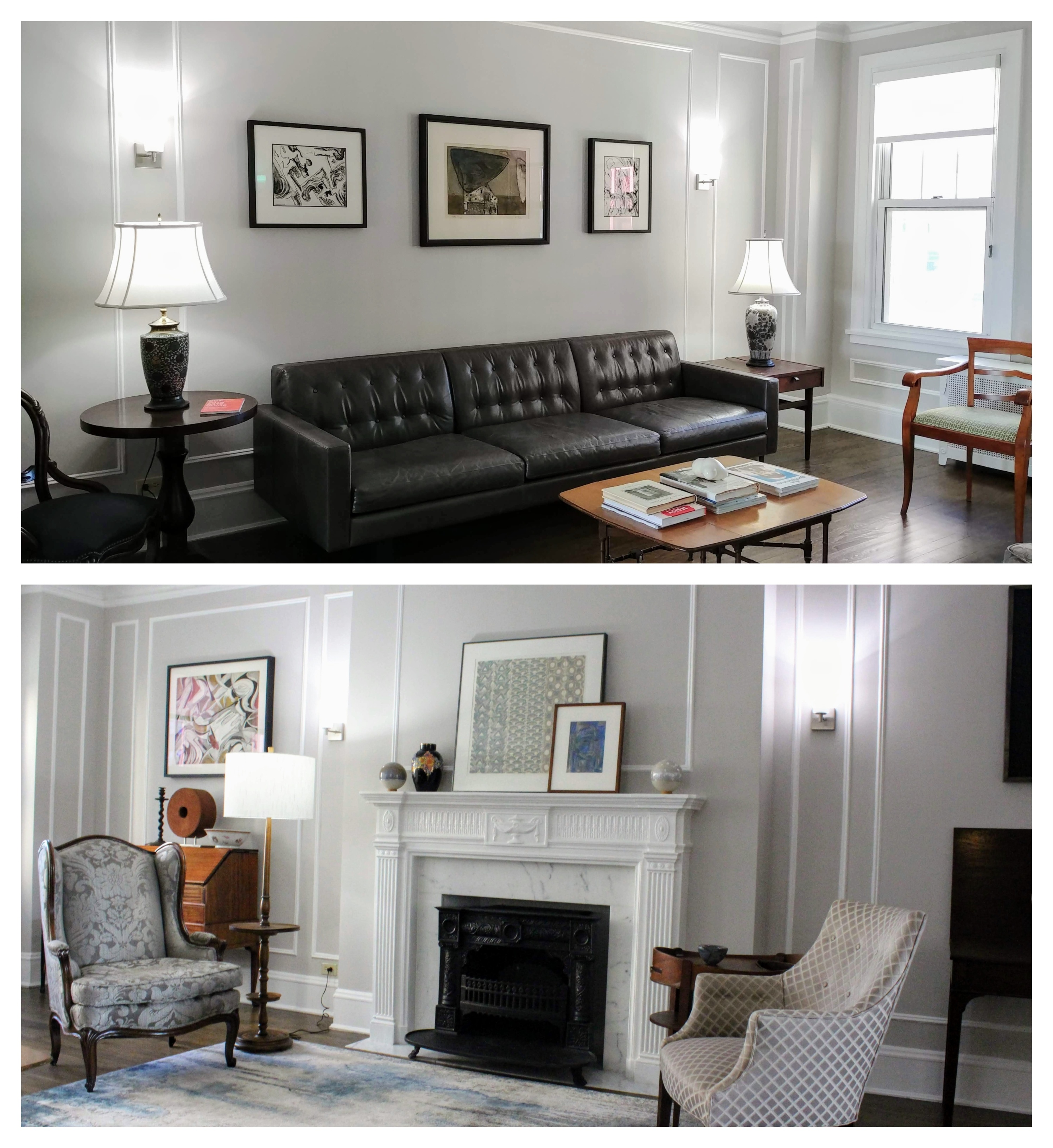 Beyond providing custom framing and restoration, we also consulted on and installed Stephen’s artwork in their home. “Beth and Joe came in to hang forty-four pieces. We had a good mental picture of where everything would go, but the green room was the room we thought the least about. Beth took a look at the room and found the perfect vignettes for all of the walls.” 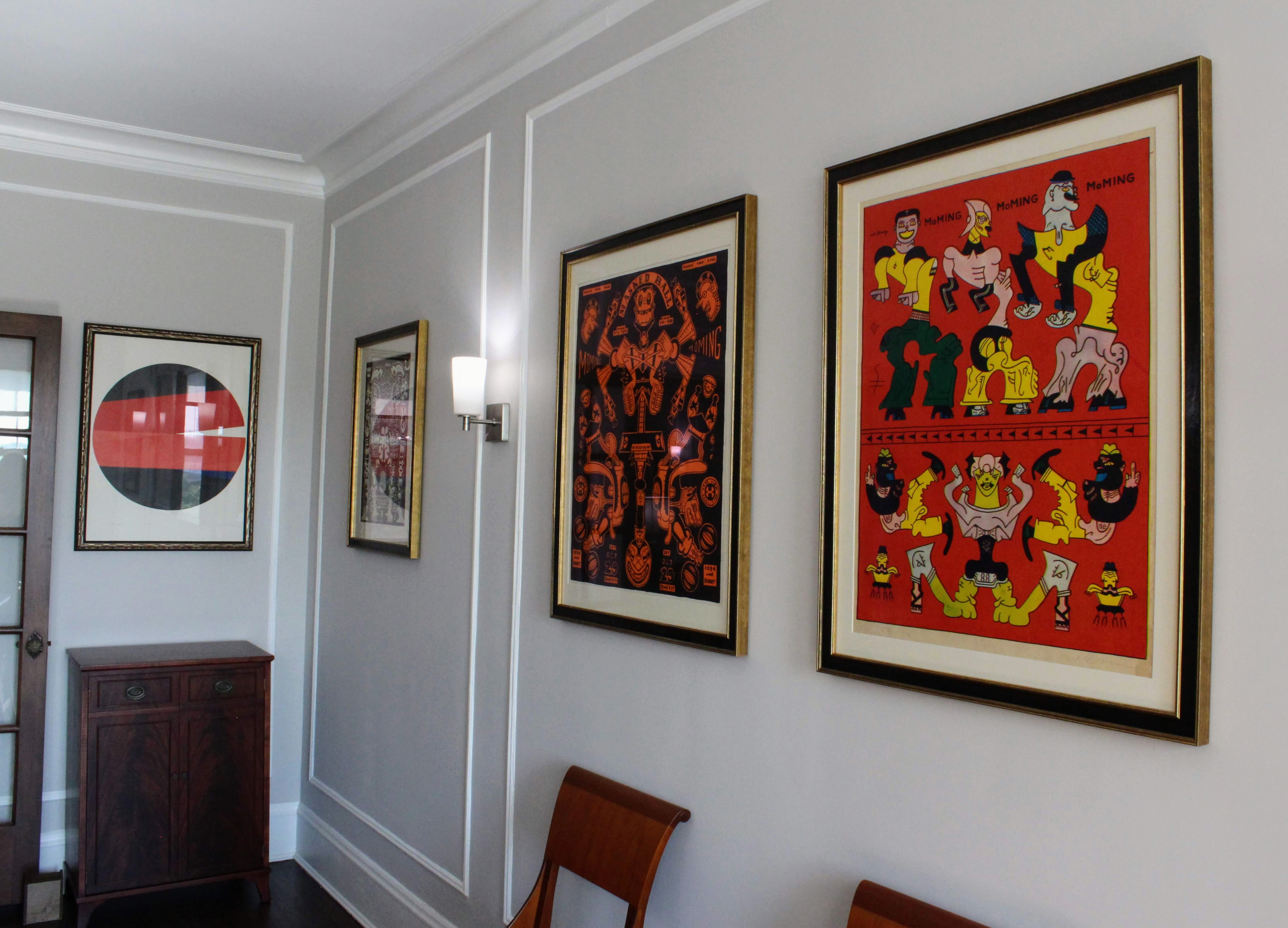 “I don’t like to think of what we do as decorating with art. We want everything to relate to each other well and we want the art to breathe in the spaces that they’re in. When we bring something home, it changes the way the room feels.” This personification of their spaces with the artwork representing the residents’ character gives deeper meaning to the collection. The artworks possess, along with the home, a sense of time and place based on the artists with which Stephen and Michael connect. From Anna Baker, who attended the Art Institute, to Karl Wirsum whose work showed at the Hyde Park Art Center, to Annette Troxel and Barbara Aubin whose works were entrenched in the Midwest, the connection to Chicago is apparent. When Stephen and Michael moved to this city, the art they were drawn to solidified the personality of their new home. “The art we found in Chicago linked us to this space and the stories in this space and the stories in this city surrounding this space. I do think that is one of the themes in our collection.”